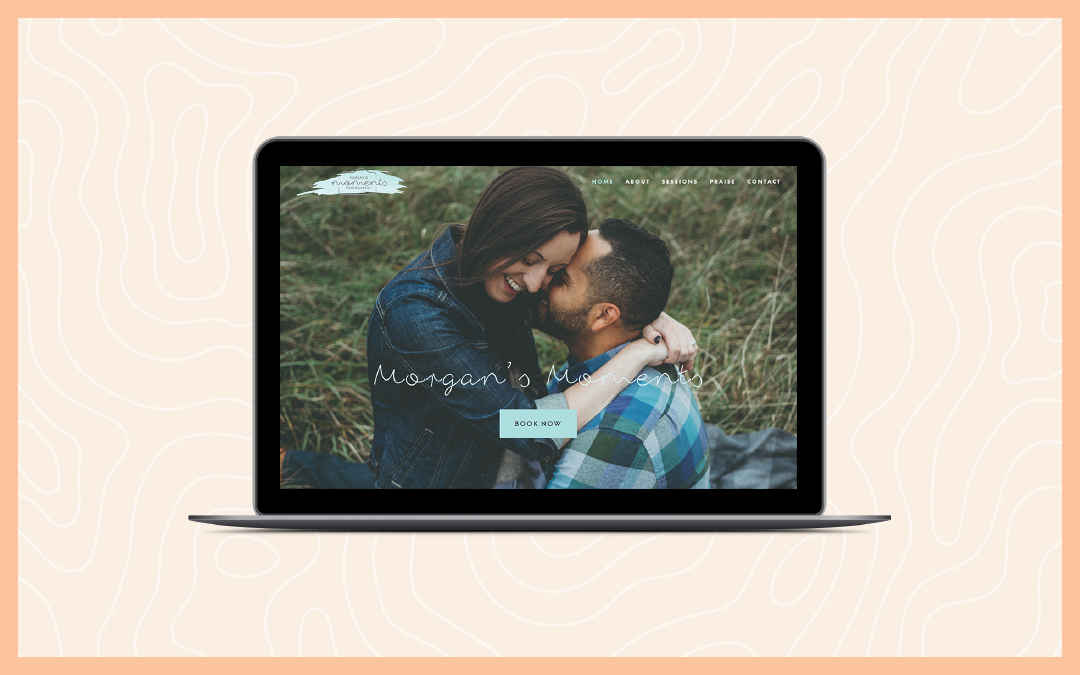 Oh my god you guys… working with Morgan was an absolute DREAM!

First of all, I’m an absolute sucker for beautiful photography, so getting to play around with her images and find the best way to showcase them was really not “work” at all!

But just in general, this project holds a special place in my heart – not just for the project, but because of the amazing friendship I formed with this one-in-a-million, heart-hustling lady boss!

It was really just a bonus that while we were becoming new besties we also were creating a breathtaking website to showcase Morgan’s stunning photography to the world! 😍

Morgan came to me with an existing logo, submarks, and an idea of the color palette she wanted. We started her project with the creation of a brand board to really refine her brand. I pulled the teal color straight from her primary logo, and then carefully selected the remaining palette colors to cover teal, white, and gray.

I also designed a simple favicon and some cute yet elegant buttons using her logo font.

In an effort to achieve a look of “rustic luxury” I incorporated some lace elements, which we later decided to leave out. 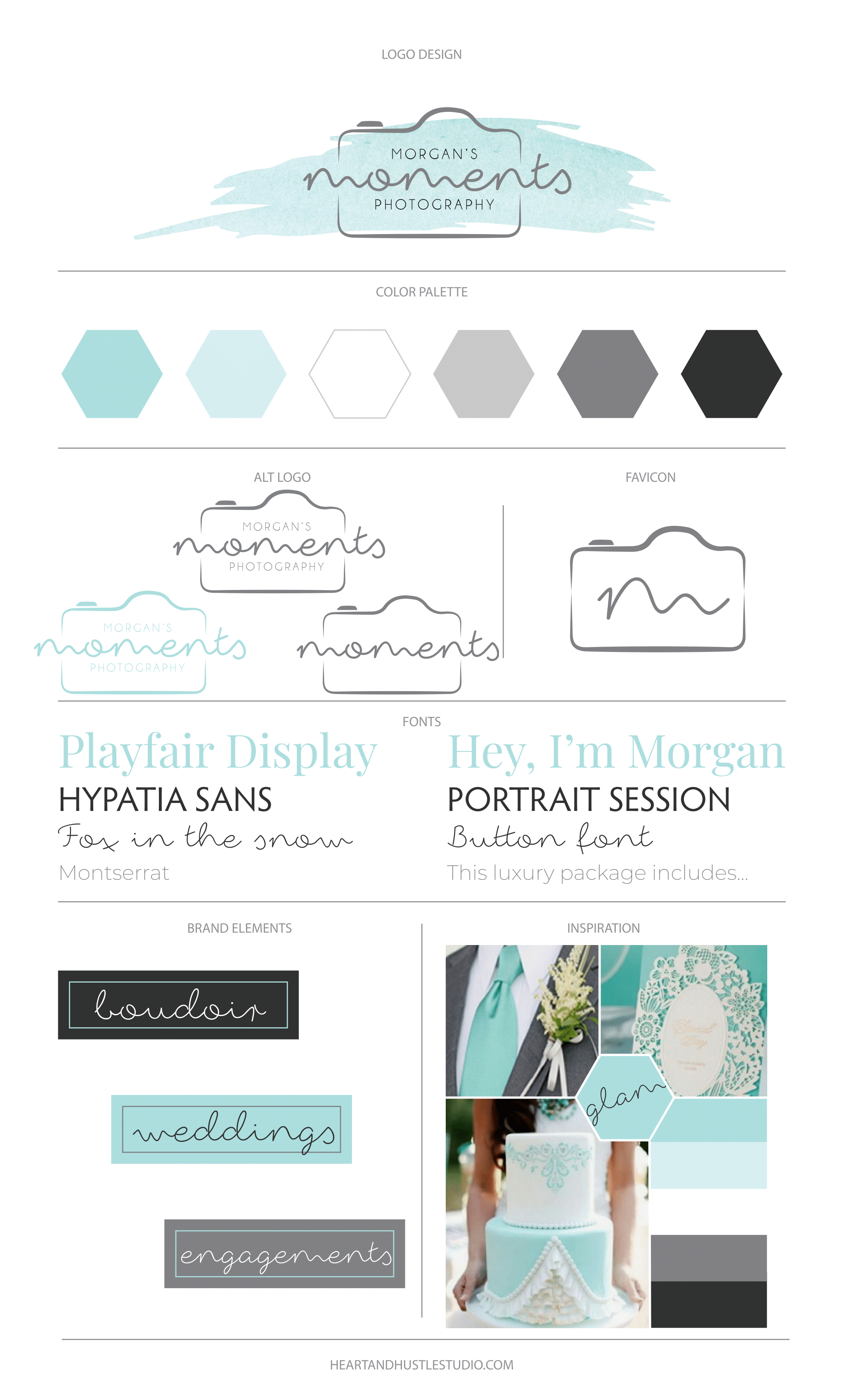 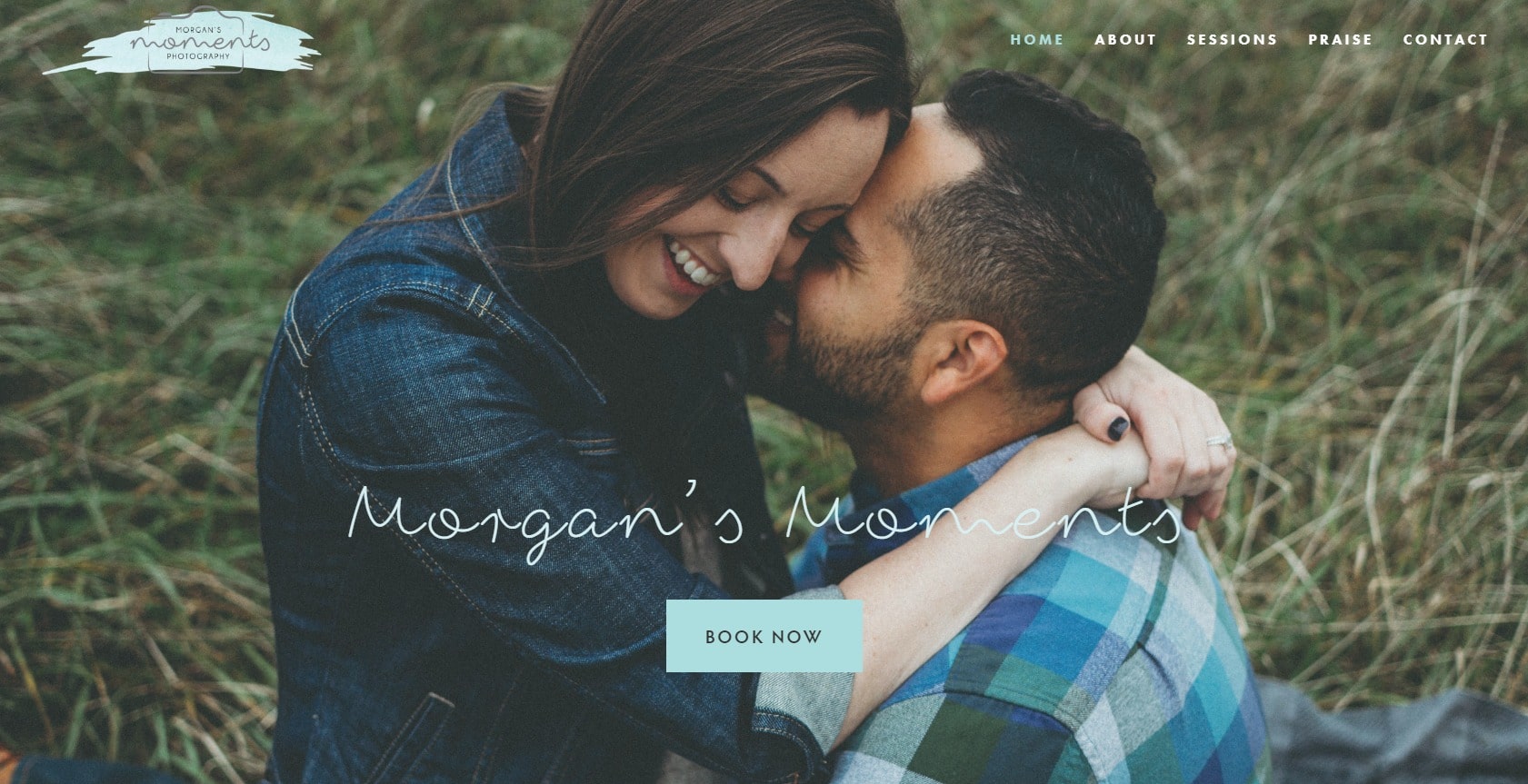 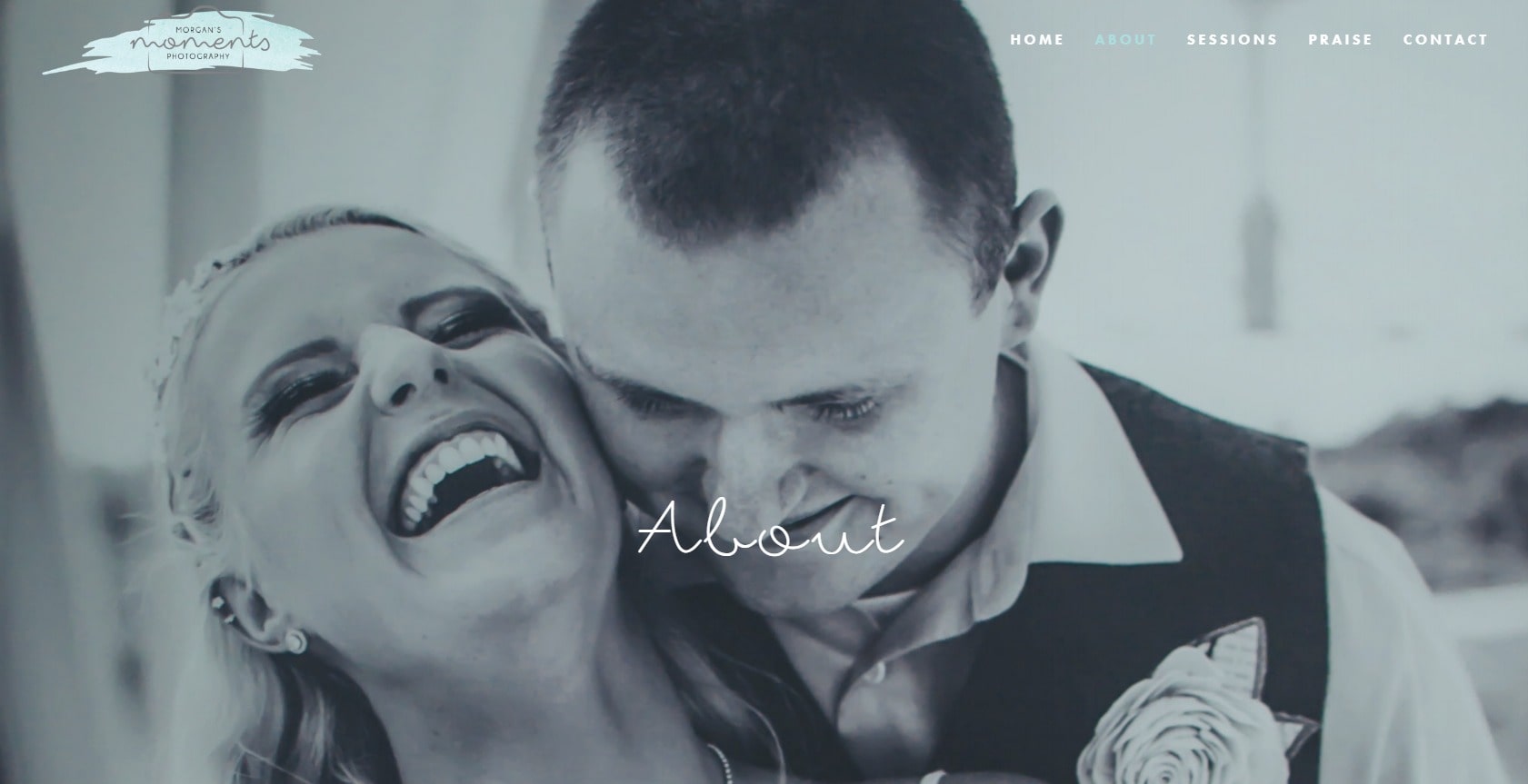 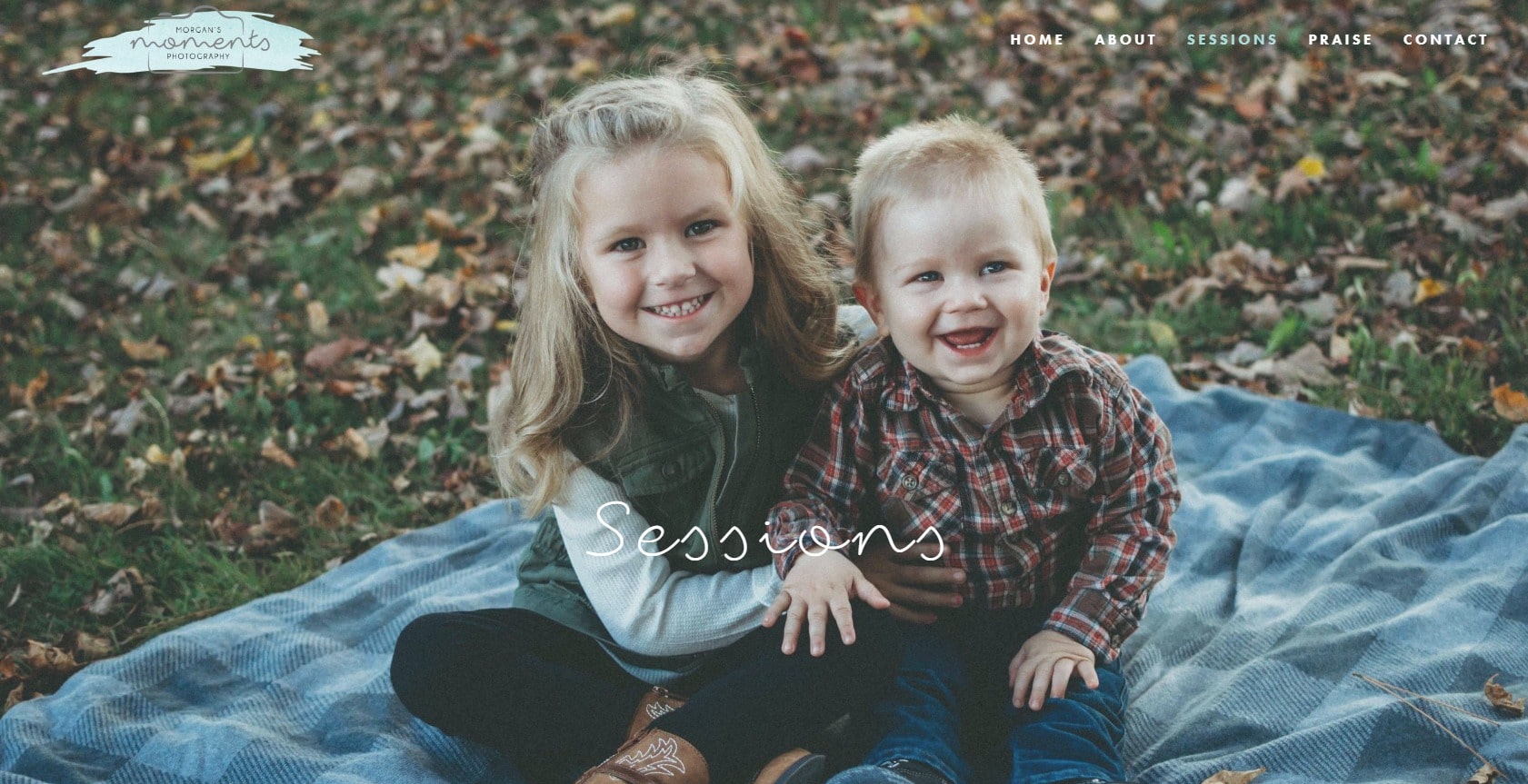 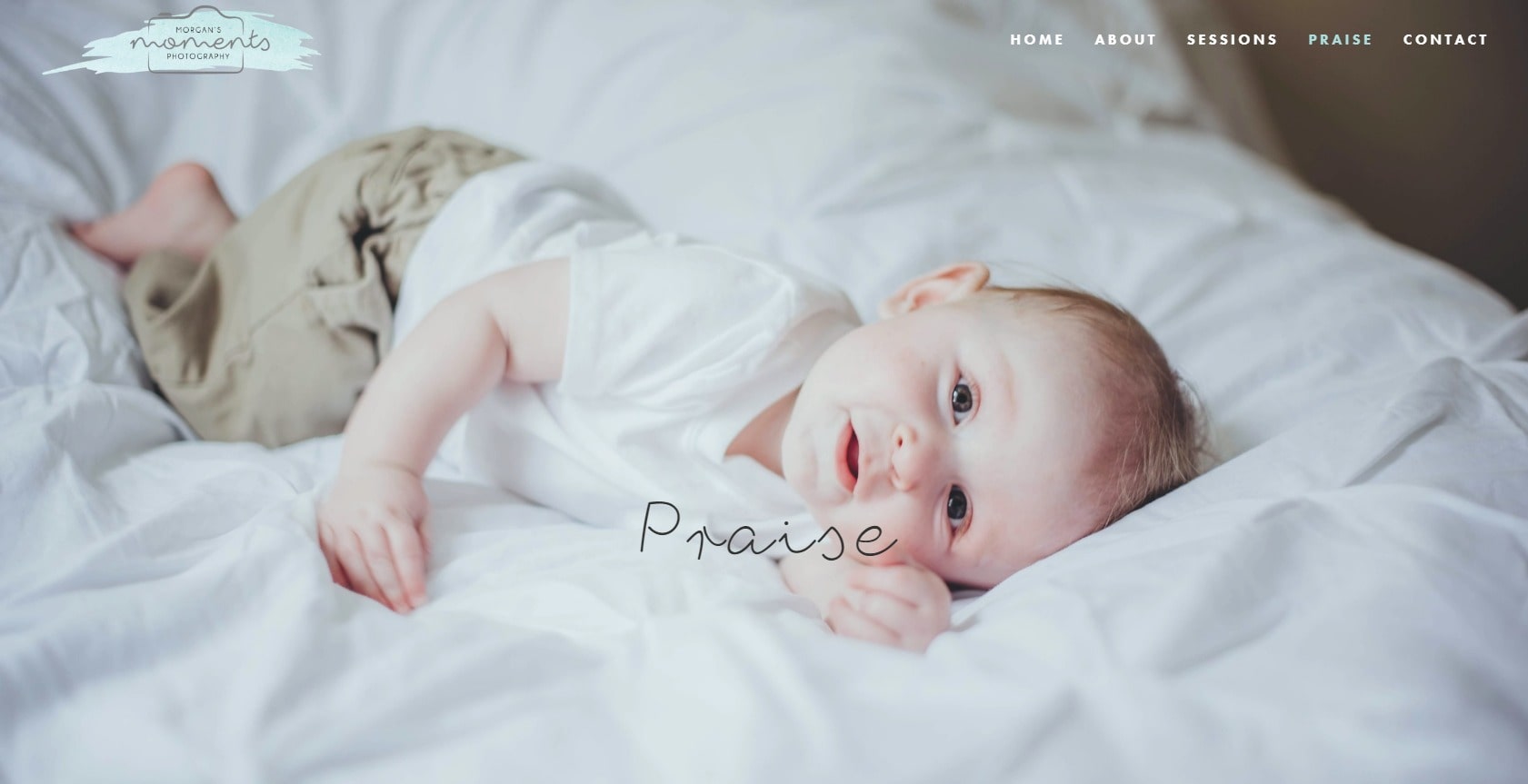 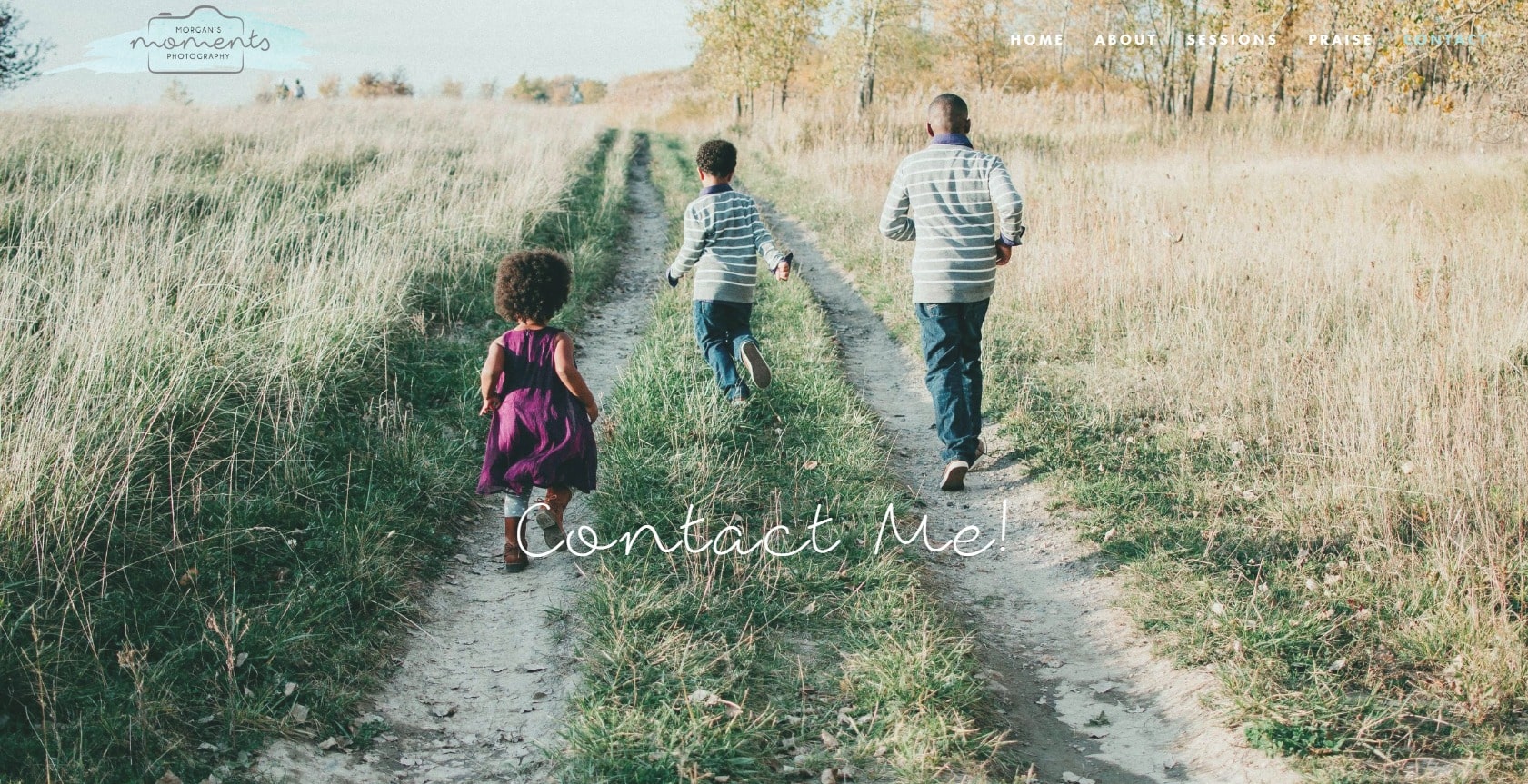 Aside from the full-width images, one of my absolute FAVORITE parts of Morgan’s website was the collages.

On her homepage I started with a collage of some session images she had, but I can’t take full credit for this idea… Morgan placed a HUGE emphasis on visuals, stating right from the get-go that she wanted her homepage to be “SUPER visual”

Well, ask and you shall receive… 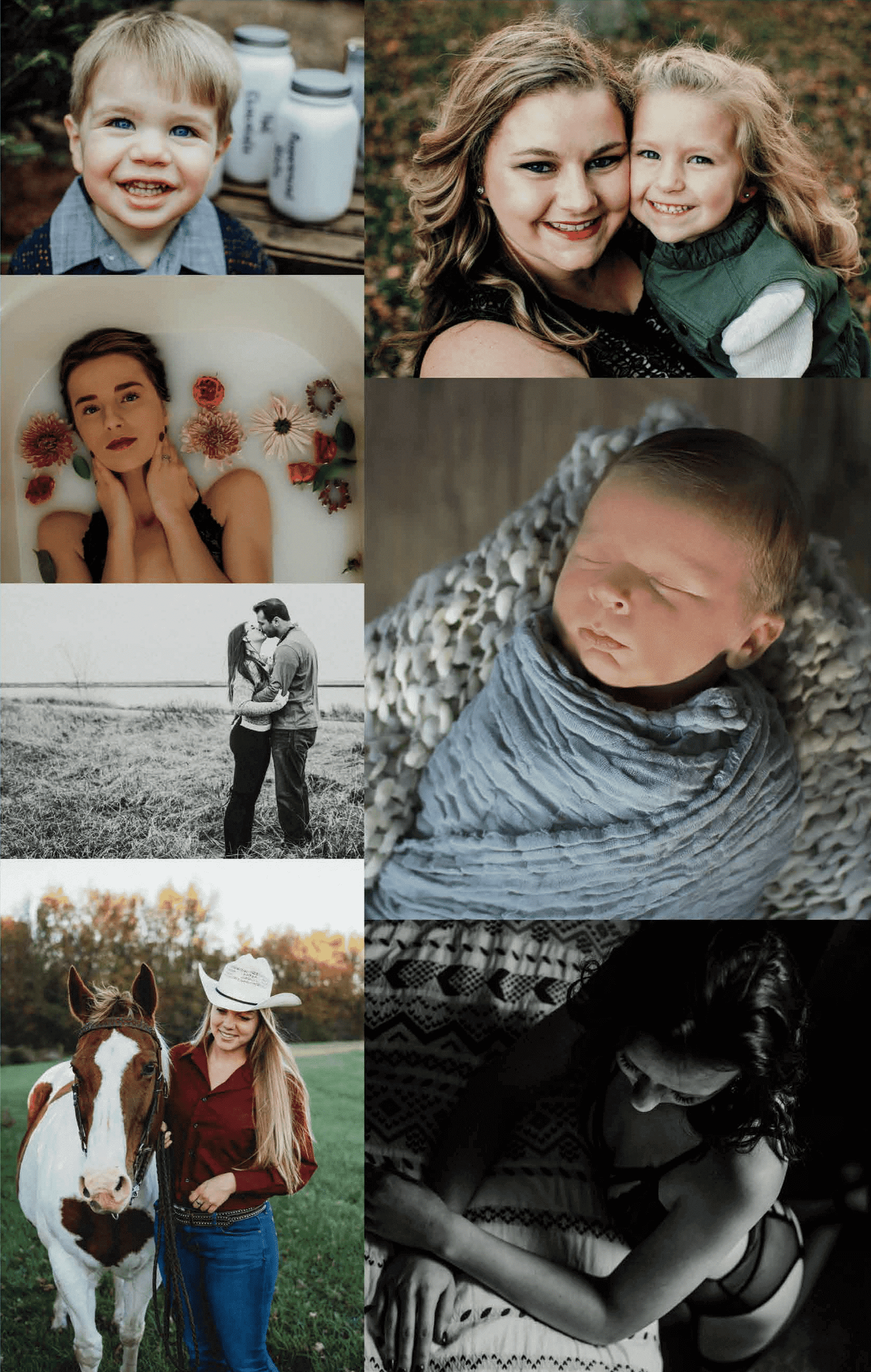 Another big part of Morgan’s business… hell, it’s THE reason she does what she does, is custom artwork 😍

Nothing kills Morgan’s soul more than a beautiful event captured, and remaining forever trapped on a flashdrive in your desk drawer. 💔 For this reason, she focuses a huge part of her business around heirloom artwork.

Morgan partners with THE best craftsmen to create custom artwork for her clients in the hopes that the artwork will be passed down for generations to come. So… to make sure that her website loves her artwork as much as SHE loves her artwork, I created not one but TWO artwork collages: one on her Sessions page, and the other on her homepage. And as obvious as it feels now, there wasn’t always an artwork collage on her homepage…

After the initial home page preview was approved, I began creating the other web pages. A short time later Morgan came to me and was like “ya know, I think we should put some of my artwork on the home page…”

*the light came on*… DUH!! Of course we should!

How that idea never came to me is beyond me, but once again Morgan nailed it and the idea came together beautifully! 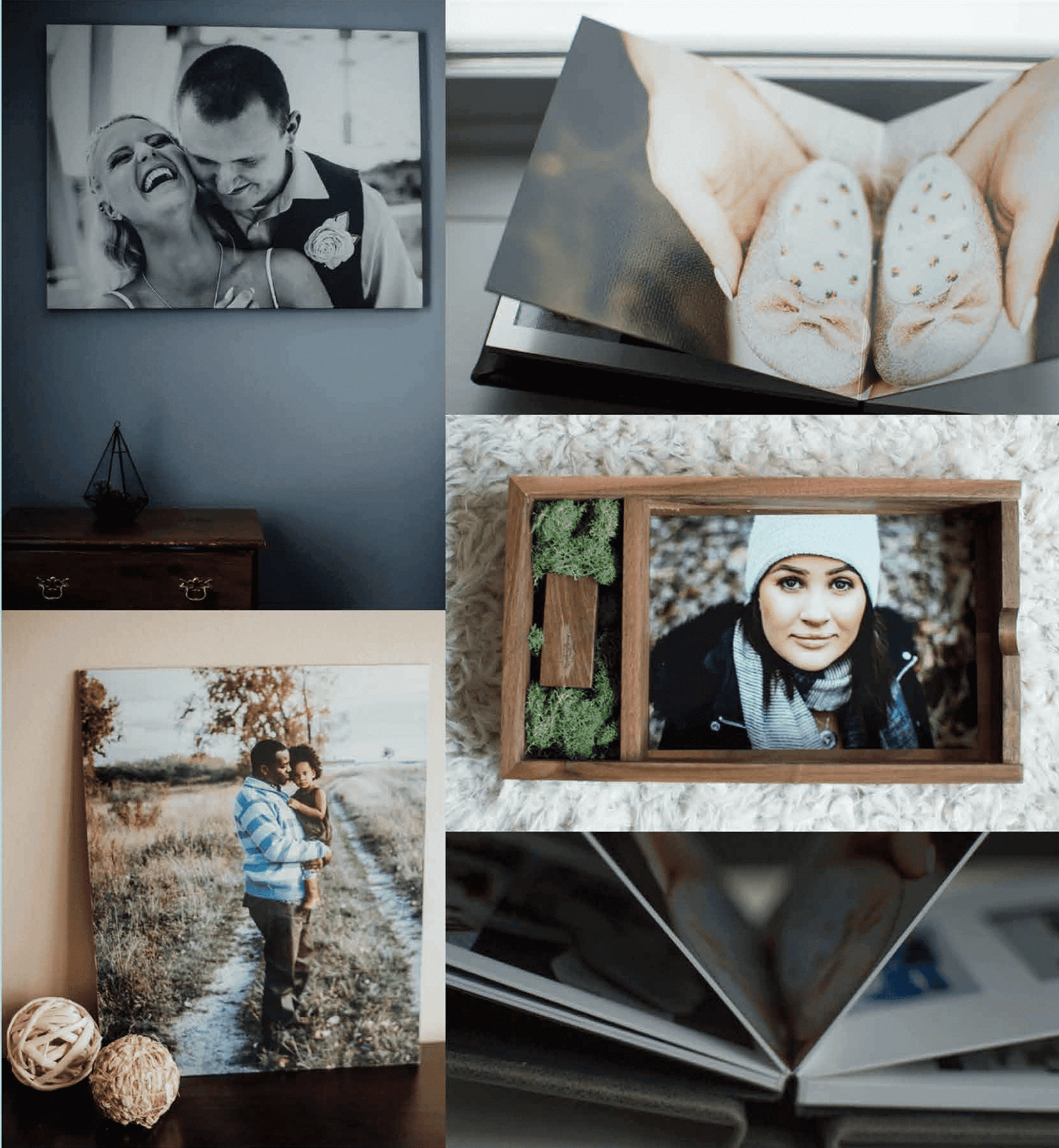 Did we just become best friends?!

Throughout this entire website build, Morgan and I weren’t just some boring old duo creating a website together… we actually genuinely became really good friends, which was by far my favorite part! We would hop on Strategy Calls, whip out a killer gameplan for the website’s next steps, mastermind the hell out of BOTH of our businesses, and laugh about… well, basically everything 👯

I so clearly remember one of our calls… I was cooking away in the kitchen (don’t let me fool you, this is suuuuper rare 😜 my boyfriend Davis is the chef in our family) and I was laughing SO hard on the phone with Morgan that Davis gives me a look from the couch as if to say “I thought you said you guys were working?!”

We were working! And we were having a goddamn blast! 🎉🤣

🔮🦄 Oh, and did I mention that Morgan is an absolute mind-reader? On MULTIPLE occasions I was typing up an email to her like “hey could you upload such and such for…” only to look into our shared Google Drive folder and BOOM, it’s already there.

“HOW COULD SHE POSSIBLY HAVE KNOWN I WAS GONNA ASK FOR THAT?!?!” ?

The first time it blew my mind, annnnnd then she proceeded to do it another 2, 3, and 4 times. She was just SO on her shit that she’d browse through the folder and see what I’d been up to, and be like “ahh I better upload this because she’s gonna need that”. Like super specific shit!!! And she nailed it every freaking time! I’ll chalk that one up as some A+ lady boss chemistry vibes! ?

And hell, if she’s that awesome as a CLIENT, I can only imagine how much she rocks her own client’s socks!

And as quickly as we started our project, nervously on the phone trying to be make a good first impression to each other… our project came to a close – with us shoving food into our faces right as we’re hopping on a call, joking about how frighteningly often Morgan forgets to turn off the stove… you could say we got pretty comfortable with each other ?

Our Launch Call was bittersweet. Of course we were both practically vibrating with excitement about the launch of her brand new website in t-minus 59 minutes. But it was also a sad realization that we wouldn’t be emailing back and forth everyday… or hopping on 20-minute Strategy Calls that turned into 60-minute Laughing-at-Everything-in-the-Universe-Ever Calls… all things we’d definitely grown to love in such a short amount of time!

Bittersweet, to say the least.

After dotting our i’s and crossing our t’s, we launched the site and the new and improved morgansmoments.biz was officially live to the world! 🙌🍾

“Corine is the best! I’m convinced we were made to work together! ❤ ❤

She is SUCH a cheerleader, and that’s probably the one thing that I love about her the most.

If you want to impress your clients and future clientele, Corine is your girl!”

At the time of publishing this, it’s a few months later, and I’m happy to report that we still keep in touch like I so desperately hoped we would 😊.

And if you actually check out Morgan’s website today, you may notice a few sliiight changes from the screenshots above 😉

Since launching her site, Morgan’s been able to swap out some of the last remaining “older style” photos with ones that match her newer, rich-and-moody photography style 🖤, and also replaced her previous headshot with some new, stunning portraits she had taken by a fellow photographer!

I remember Morgan being SO nervous about changing ANYTHING on her website, and I’m so freakin’ proud of her that with just a few short tutorial videos I created, she’s been able to manage and update her site all by her freakin’ self!

Since launching Morgan’s new site, I was lucky enough to team up with Morgan again in 2020, as she discovered her newfound love: empowering other women through boudoir photography! So naturally we created a jaw-droppin site for her boudoir site.

Ready to hustle less, live more, and have a website you LOVE?

I'm ready to get started! 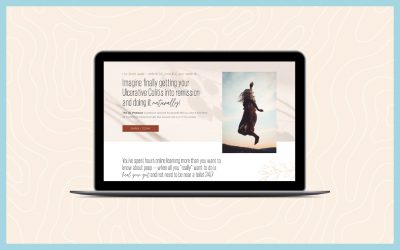 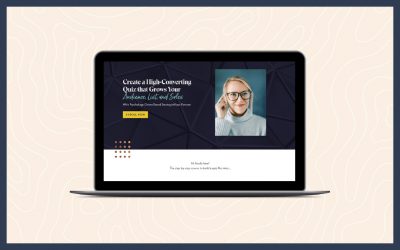 At a Glance: Sales Page – Convert with a Quiz 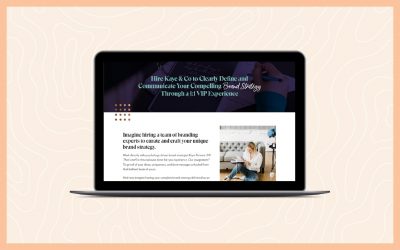 Sales Page PreviewSome pages hold a special place in my heart - and by some pages, I mean sales pages 😉 These highly strategic, conversion-focused pages (a massive labor of love) make my strategy-lovin' heart soar - and aim to do the same for my client's bottom line!... 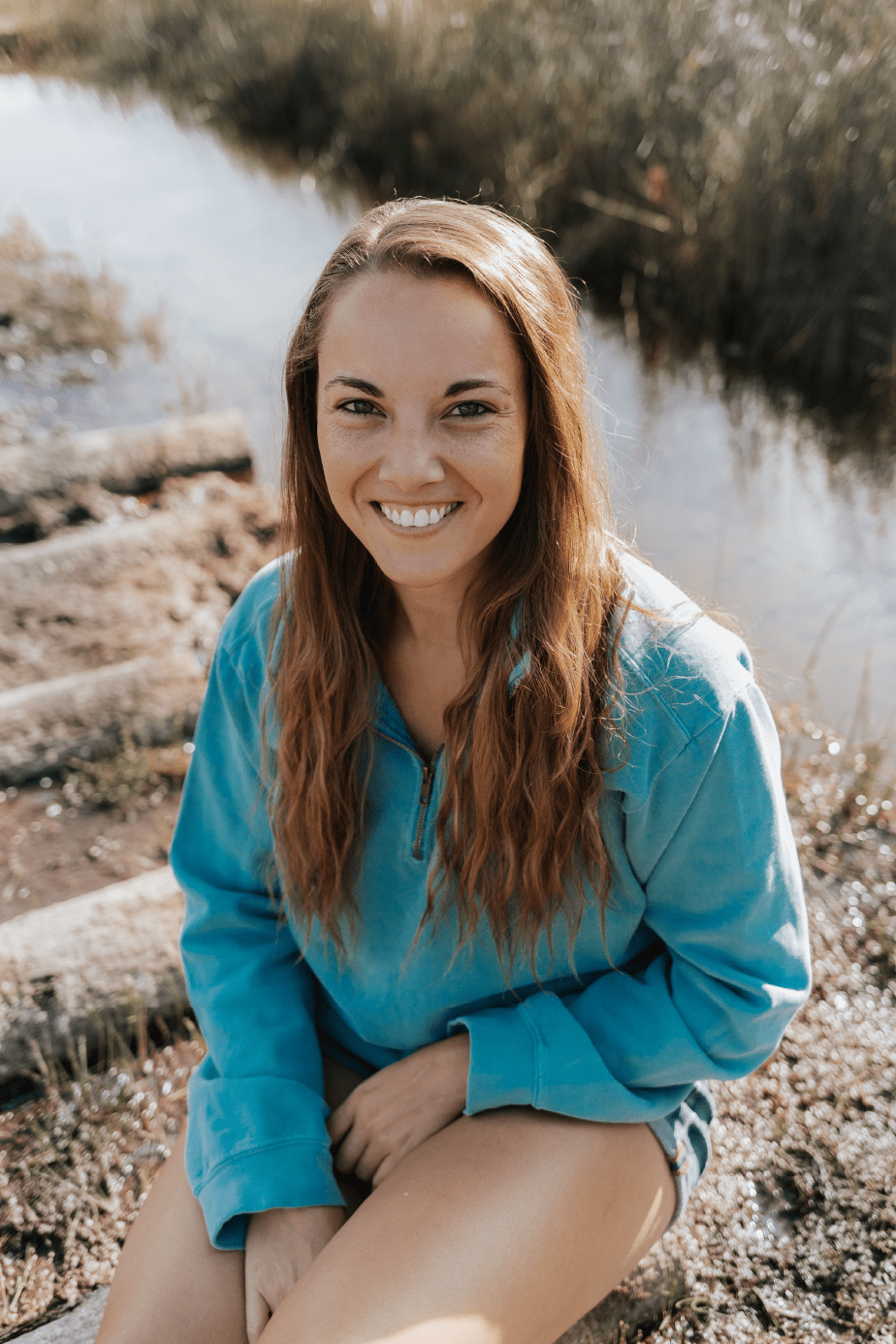 I help online entrepreneurs hustle less and live more with a strategically designed website that lands more clients, frees up your time, and helps grow your business for you – even while you're out adventuring, relaxing, and living life 😍🏔️

The strategic roadmap for a service-based website that works for you while you're out living your life!

At a Glance: Sales Page – Convert with a Quiz

Sales Page PreviewSome pages hold a special place in my heart - and by some pages, I mean sales pages 😉 These highly strategic, conversion-focused pages (a massive labor of love) make my strategy-lovin' heart soar - and aim to do the same for my client's bottom line!...